To devote the space of the Foundation to the sculpture, it is also giving back to see this space.

This is my first impression: the pleasure to access a place made to himself, to the skin of its walls.

To the sides of which or against which works can resonate.

I’m first attracted to the work of the Dutch artist Henk Visch. Bronze figures that unfurl in space with beautiful patinas.

Yet familiarity slips away to make room for a sense of strangeness. The faces are repetitive and inexpressive, some members missing or stretch. Bodies are elastic, engaged in a process that is personal. Nice snub to the first illusion of realism .

The creatures of Visch are alien contortionists. They refer me to the soul postures that seek to incarnate. An invitation to an inner journey? That suggests perhaps the name of a sculpture – Inside story – representing a one-armed man ready to roll on itself, with its head like a stone among the stones which are placed at his feet.

And then there are the ‘bunch’ of Chinese Sui Jianguo, clods of Earth informed at first glance.

But when I approach, I’m caught by the will of the artist. Everywhere the traces of fingers, palms or fists – dressed in boxing gloves sometimes! -tell the gestures of the genesis of the works.

And something profoundly human is born of this verticality desired and travelled by the energy of so much visible fingers yet.

These piles are loaded intentions, strength and sensuality. This is  remarkably translated  elsewhere by the film that gives to see some episodes of this Genesis idling. Such idle gives the intimate dialogue between the hands and the clay.

Sui Jianguo model under constraint, blindfolded. Indulging a tactile relationship with the material, leaving it the opportunity to keep his identity.

Thus, even cast in bronze, sculptures remain of clay. The man did not top. A meeting took place.

Finally, there is the work of British Richard Deacon, that really baffles me. A uncomfortable world for me. That I want to quickly label before away me.

Some of his sculptures make me think the structures of atoms that I handling in Physics in high school.

Then I tell myself: ok, this artist produces geometric structures excluding any affect. Yet they can be fleshy, stubby. Colorful and playful like children’s toys. Deployed in 3D space, or completely flat, giving the illusion of 3D.

Where is the outside, where is inside?

There is as a line also pleases me. It is rounded and closed, wooden, and spin on itself. It is called In the grass. I find it sensual and its name invites a stream of images in me: the undulation of the grass under the wind, my little girl rolls, the trees dancing around,   stems that  wiggles…

The sculptures of Deacon cannot be locked. With the thought, the artist gave body to novel and open objects.

In the Giacometti Court, the monumental sculptures of the 3 artists coexist in their beautiful difference.

I left the Foundation with a renewed feeling of space.

sketches made from the exhibition: 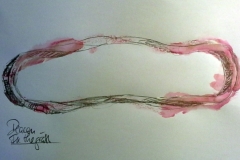 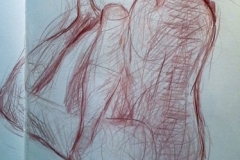 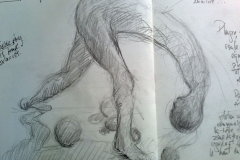 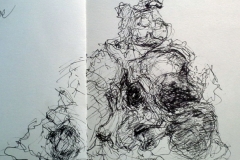